Given  that this is 3-year anniversary of the Women’s March, I have been thinking about that day in 2017… 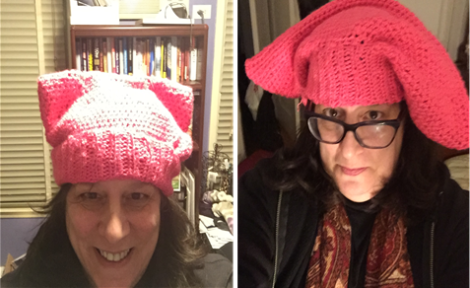 Woody Allen, one of our favorite child molesters, famously said that “80% of success is showing up.”

Despite its provenance, I took that quote to heart when I decided to join the Women’s March in January 2017. Never mind the plantar fasciitis, the looming tax paperwork, or my fear of having my co-workers discover I was a liberal, I was showing up for this one. I even vowed to make my very own you-know-what hat. (I can’t type that word. I am so repressed).

The last time I had attempted the fiber arts—and the last time I had joined a protest for that matter—was in the 70s, when I made macramé owls for friends and family and marched against the Vietnam war. Forty-five years later, here I was, working my arthritic fingers into a frenzy to crochet my own kitty ears. I spent a week learning the ribbing pattern for the rim before moving onto the vertical piece. How hard could it be? Several rows of the same thing, back and forth, back and forth, taking care not to drop a stitch as I turned. An over-compensator in all things for fear of coming up short, I began to ADD rows to the hat. The section that was supposed to be woven into a perfect rectangle was, dare I say, “manspreading.” Oh, I was in denial about it too. I tugged at the stitches, pretending all was perfect. Once I had a good eleven inches of sprawl, it was time to bring it all together.

This was no pert, petite kitty. It was a wallowing Eeyore, a sad, droopy, donkey-like affair, sort of like my own…well sort of like my own hooha. (Can’t type the word). How could I possibly march for Women’s Equality and Empowerment with such loose folds? The hat needed a labiaplasty and fast. A simple and symmetrical nip and tuck on each side would create a youthful lift.  I spent the evening before the March performing the necessary repair, stitching the ears until they stood up like the proud, confident millennials that would soon surround me.

On that glorious January morning, I boarded the train with friends, and I immersed myself in the sea of hats—all different colors of pink, countless styles, made of various materials and fashioned in a number of creative ways, not unlike—well—not unlike—you get it. I could have drooped after all. No one would have cared. It was a day when everything felt right and nothing hurt. It was a day I showed up.